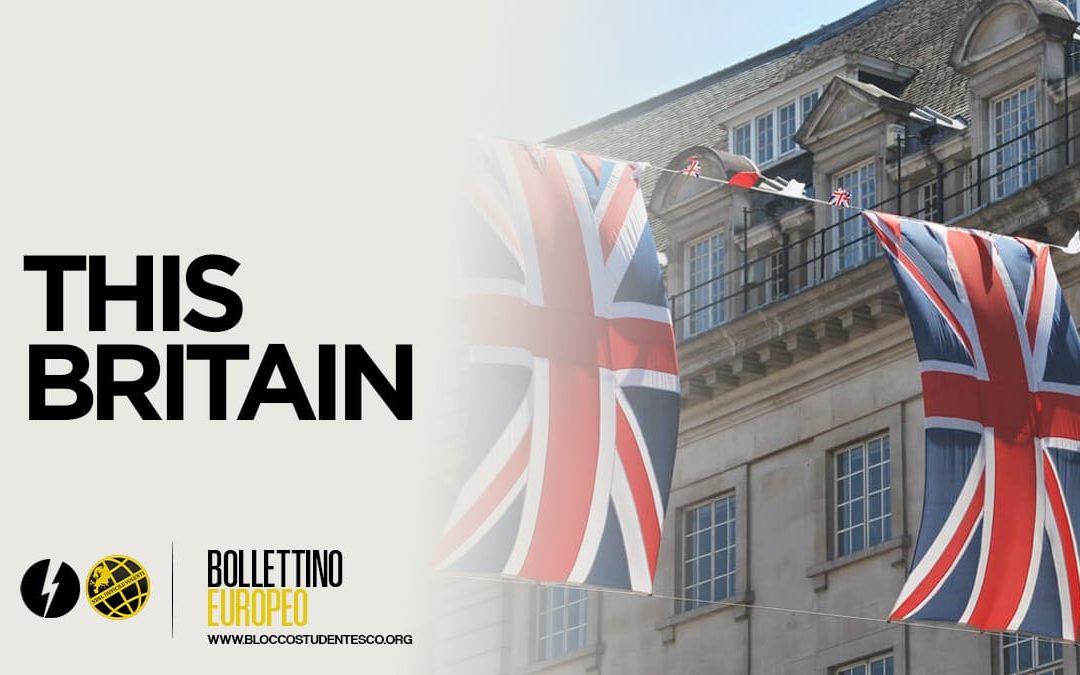 If you think about a prominent European Nation riddled by enormous problems like: mass landing of illegal immigrants in the reason of tens of thousands; soaring double figure inflation and humongous public debt; rampaging crime with unprecedented violence especially in big cities; gloomy economic situation with the local currency dramatically losing value; more than 20% of the population (or roughly 15 millions, or one in 5 Britons) in poverty; an out of control “woke” and “Politically Correctness” agenda that is causing endless, surreal quarrels while mining the education system and paralyzing public institutions; finally, with a new conservative government with a woman Prime Minister already in deep troubles, what would come straight to your mind? Make a polite guess. No, it’s not Italy, although there are several common points: this is Britain on the last quarter of 2022 and with a good deal of chances to see the situation getting far worst next year. Actually, I really think Italy is better off compared to United Kingdom, and honestly, I wouldn’t even thought that all this could happen one day.

In the beginning was the Brexit. Allow me a classic incipit as the more the time pass the more the problems for Britain are growing to biblical proportions. It was not the result of the actual referendum: many Britons (including yours writing here) cheered for the narrow victory of the “leave front”, trusting this was a well-deserved slap given to the unelected European Union bureaucrats, a brutal waking call to these parasites arrogantly trying to run our Country from abroad, jeopardising our sovereignty, limiting our independence. Trouble was that apparently no serious plan was made by the Conservative government: the PM David Cameron promised to hold the referendum during his electoral campaign to secure the votes from the UKIP Party of Nigel Farage, probably hoping in his heart to see the victory of the “Remainers” coming out from the polls. Unfortunately for him the result was clear: The United Kingdom must leave the European Union. Then the question finally came: “Ok but How”? Another election, another candidate, another promise: it’s now the turn of Bojo, the flamboyant former Mayor of London (and former staunch supporter of the Remain front…), Boris Johnson, playing now the hard Brexiter, managed to get rid of party colleague Theresa May and got elected with the campaign slogan “Get Brexit done”. The Brexit process today is far from being over and what we saw so far could only cause fear of a worsening situation. Problem with supplies from groceries to fuel; troubles between British and French fishermen; lack of workers from the agricultural sector to transports, catering and services; rising tensions in Northern Ireland, factories, financial institutions, companies closing or moving abroad. We witnessed the exodus of thousands of young, skilled professionals from London to other continental capitals; many choosing the Irish Republic. Subsequent pandemic crisis certainly didn’t help at all but as a matter of fact what was once known as “Cool Britannia” is now a fading souvenir. And the worst is yet to come.

The most worrying case as mentioned is the Irish border: freedom of movement for goods and people shall cease between the republic and the 9 counties of Ulster and this is simply not acceptable for both Republicans and Loyalists. Discussions are ongoing and proposals are on the table, but nothing so far seems to be able to steam off the rising tension: in the past months we saw petrol bombs fending the air and serious clashes taking place between rioters and police; something unseen since the good Friday Agreement of 1997.

As said the Brexit is not done yet. The final seal on the process will be the feared UK Customs Declaration Service and imports control. Due to take place at the start of 2023, it has been postponed to the end of next year. Not a good sign, isn’t it? This procedure implies tougher and total control over all import export, with an extra burden of bureaucratic procedures and further slowdowns at the tolls. Considering that we have already a dramatic border situation with huge delays, endless queue and frequent industrial actions, with the CDS coming in full force many analysts fear that this could lead to an economic paralysis.

Talking about borders: during the last 4 years almost 100,000 illegal migrants have landed on Britain shores, with figures increasing dramatically month after month. One of the main purposes of Brexit was taking back control of our frontiers: again, total failure. The numbers are massive, and yet not representative of the real situation: these are the ones that had been intercepted by the police, border force or rescuers. Many others get in unnoticed liaising on a net of family members and fellow nationals: easy with all the well-established Asian or African communities scattered all over the Country. To tackle this national emergency Priti Patel, interior minister with Boris Johnson’s cabinet came up with a rather original proposal: deport the illegal migrants to Rwanda where they could eventually apply for asylum and if this granted, settle there. In her mind this would have deterred the thousands waiting to cross the channel. An agreement is in place with the African Country and some accommodations made ready but so far not a single plane have left: an army of solicitor from a great number of so called “humanitarian organizations” are permanently ready to bury any attempt to deport migrants under a burst of appeals to courts. The minister of the Truss government, Mrs. Suella Braverman throws out another idea: deny the right to claim asylum to all those entering illegally in Britain. Not an easy task on the medium range as this would imply getting out of the Human right Declaration and going against international laws and established conventions.

The economic situation is looking not that good either. A 2 figures inflation is eroding the salaries causing a string of strikes in the public sectors no seen since del 1970’s. Just like in Italy this is mostly caused by the dramatic soaring of energy costs. But unlike Italy Britain is or should be self-sufficient and even able to export, considering the gas and petrol resources available up north, 8 nuclear plants, 11.000 and more wind turbines (covering 26% of the national electricity consumption); well is not or, better, not anymore. The merciless rules of the free market brought UK from exporting energy to rely on import. Yet, a great deal of gas and electricity are still produced here but despite this, prices trebled thanks to a shameless untackled speculation. And don’t expect much help from the ruling Conservatives.

The first measure announced by the ex-PM was to cut taxes to the richer in order to boost economy. This proposal was dropped in a matter of days amongst widespread criticism. In mean time Mrs Truss had the unpleasant task to deal with the umpteenth scandal in the party: another conservative MP involved in a sex scandal: the Trade Minister has to be sacked just a few days ago for sexual harassment, followed by no less than Kwasi Kwarteng, the Chancellor of the Exchequer (Finace &Treasury) fired by Liz Truss who was already trembling, with a concrete possibility to see old Bojo back with a bang on the saddle.

Giving the situation of the Conservative Party, it has been quite funny hearing the Italian PM candidate, Giorgia Meloni, affirming: “if I was British I’d be a Conservative”. Ok. Sure? The public perception is that from Cameron onward, they just caused a great deal of damages to the Nation so far. The biggest effort of the Party in late year was to try to modernise their image, bowing completely to the inclusivity, diversity, politically correct dogmas. Or perhaps they have quite cynically realised that there is a growing “ethnic vote” in UK. Take Sadiq Khan, first Mayor of London a Muslim with Indian/Pakistani origin: during his first term in office the capital reached an all-time low for crimes and murders, gang related violence, drug dealing, poor transport and cleaning. And yet has been re elected for a further term. Appalling Performances were considered secondary: his origin, his image granted another round in office. Which is something not very surprising considering that almost half of London population are non-British or not white in general. The Borough of Tower Hamlets was the first city district in the whole of Europe with a Muslim voters’ majority: there too the former local Mayor Lutfur Rahman of Bangladeshi was re elected despite a very poor performance and a number of serious allegation of corruption and bribery.

“The diversity of British society” has been decisively reflected in the last Tory governments. To name a few: before the black Kwarteng just sacked, previous chancellor was Rishi Sunak (an Indian multimillionaire; his wife, even richer, thanks to a non-residential status lives in UK but doesn’t pay any taxes here, he is also the neo-elected First Ministre). Interior ministers: Johnson chose Priti Patel (another Indian), Truss appointed Suella Braveman (Indian/African). It’s a weird sensation by the way to see these poor ladies trying to prevent (without much success as pointed already) the arrival of tens of thousands of illegal migrants that mostly looks just like them. It’s a matter of fact that inclusive and multicultural shaping of the political class didn’t produce very encouraging results so far, neither locally nor on a national level.

On the other hand, there’s one thing that is working rather well and progressing steadily in Britain today: “woke” pest and the political correctness folly are advancing steadily. Statues are toppled or seriously tottering; proposals to reduce or ban from classical studies courses at top Universities the works of Homer or Virgil; middle-aged men dressed as women are sent to primary school to tell inclusive fairy tales to children; some words are forbidden and the list is growing daily; the autochthones and the white people in general must understand that they have a stain of guilt and that they’ll carry it forever. That’s the sort of message that you incessantly get from the media and institutions at a much higher pressure level compared to Italy.

This is Britain today, we saw this coming and don’t know precisely where we are heading but the feelings do not lean towards optimism… It looks grim up here. And in case you don’t know yet, even the Queen is dead.